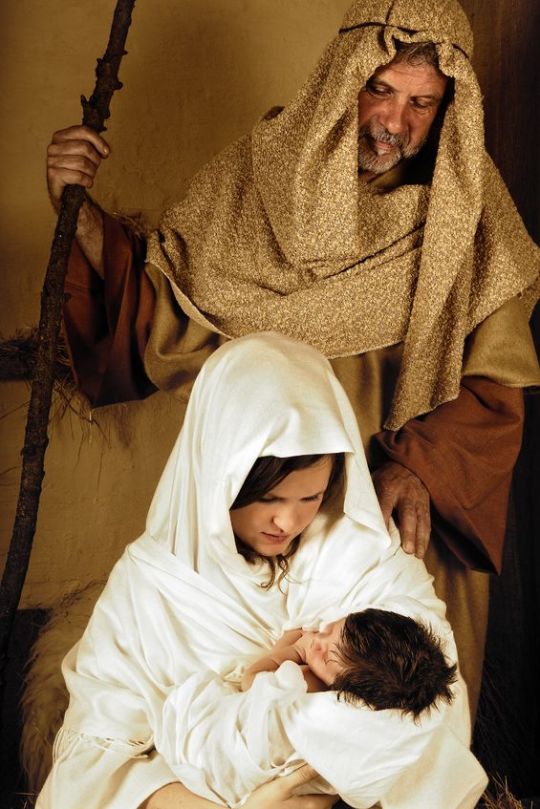 The gospel reading for the fourth Sunday of Advent tells us of Joseph’s dream about Mary’s expected baby. Joseph – and Mary for that matter – must have been a little perturbed about this somewhat surprise gift from God of a baby. Here’s what I said in my sermon.

Christmas will soon be over. And we’ll be counting the cost of all those unwanted Christmas gifts.

Surveys from the online classified advert website Gumtree have shown that when the cost of all those unwanted gifts is added up it is estimated that they are worth nearly £2½  billion.

Apparently on average each of us will receive two presents we don’t want worth around £45. And it seems that the top givers of unwanted presents are  mothers, aunts, and mothers-in-law. Fathers and fathers-in-law don’t come into it – perhaps because they don’t do any of the present buying! And top of the list for unwanted gifts? A third of them are clothes, followed closely by beauty products and toiletries.

And after Christmas one in five of those unwanted gifts will be shoved into the back of a cupboard and forgotten. Another one in five will be given to someone else as a gift. Just think how many presents you’ve had over the years not because someone took a great deal of thought over what to buy you but because they were desperate to get rid of something they didn’t want.

The numbers of unwanted presents being sold on Gumtree’s website has, they say, shot up dramatically in recent years. And the number of people who return gifts to the original store to get something they really wanted has, apparently, also rocketed. And many people, it turns out, are so blatant that they don’t like their present that they ask for the receipt as well so they can take it back for a refund!

Today in our gospel reading we how Joseph found out about a very precious gift that at first he didn’t want but that, in the end, he was persuaded to keep.

Joseph is betrothed to Mary. They are not yet married, but betrothal is for Mary and Joseph a far greater commitment than engagement would be in today’s culture. A betrothal was only breakable by divorce. And Joseph finds out during the betrothal period that his intended wife is pregnant. Now, in the culture of the time a baby was seen as a very precious gift from God. It was a time for real rejoicing. And a woman who didn’t produce children for her husband was seen as a disgrace – no concept that it wasn’t her fault in those days. And nobody ever made the conscious decision not to have children.

Firstly, the woman Joseph is going to marry is pregnant. Now, even had Joseph been willing to accept the child as his own, which would have been unheard of, the problem is that they are not yet married. And the rest of Joseph and Mary’s community would have been appalled that they had produced a baby before they were married. There’s no way he can actually accept this child even if he had been willing to stand up to the condemnation of his community and ignore centuries of tradition.

Secondly, for Joseph there is the added problem of the true father of the child. Who was it? Remember that this is a small community. There probably weren’t many possibilities if it was someone within the community – perhaps the father had been a passing Roman soldier. Mary obviously hasn’t come up with a name. There is no indication in Matthew’s gospel that she has made any attempt to explain to Joseph what has actually happened. And to be honest, had she tried to explain you wouldn’t have expected Joseph to believe her story of a visit from an angel.

He can divorce her. And being a righteous man, Matthew tells us, he doesn’t want to expose Mary publicly to the consequences of her pregnancy out of wedlock, so he decides to deal with everything quietly. Perhaps – and we shall never know – this is one reason why when Mary finds out she is pregnant she goes off to visit her cousin Elizabeth. It would have kept her away from public view in her own community.

But then Joseph gets a visit. Just as Mary had the news broken to her by Gabriel, God’s messenger, that she is to receive this amazing gift from God, so too Joseph receives a visitation – in his case in a dream – from an angel to explain what is going on. And after hearing the angel’s message Joseph changes his mind and the wedding is back on.

Think for a moment what it must have been like to be in either Joseph’s or Mary’s position. Mary finds she is pregnant even though she is still a virgin. It’s all very well Gabriel turning up and explaining everything but she still has the task of explaining it to her family and friends. And Joseph is in much the same position. He must have been asked so many times, “You can’t really mean to marry her? It’s not your baby!” You could forgive both of them for thinking that this heavenly gift of a child was not a very welcome gift at all.

And yet they are both willing to accept what God asks of them. There’s no question of rejecting this gift, no forced smiles as they say, “Thank you very much,” while muttering through clenched teeth, “But I don’t really want it!” God’s gift, surprise though it is, life-changing though it is, is accepted willingly and with joy.

And the wonderful thing about this gift is this. This is an example of a surprise gift that Mary and Joseph accepted with joy – and which they then pass on to the rest of us. Because two ordinary people were willing to listen to God, willing to accept joyfully his gift of a child, the Son of God was able to come into our world and to live as one of us. Not an unwanted gift to be disposed of, but an unexpected gift that was joyfully embraced and shared with everyone.

Without Mary and Joseph there would be no incarnation, no Jesus, no Emmanuel, no God-with-us. Because of them God was able to give this precious and wonderful gift of a Saviour to each and every one of us.

And yet for so many it’s not a gift that they particularly want.

However, this is a gift that’s not exchangeable. A person may not want it but it’s still there. You can’t return it to where it came from and say, “I’d rather have something else.” God sent his son into the world to be born to Mary, and to have Joseph as a foster father – his name was to be Jesus because he would save his people from their sins. He was the fulfilment of the prophecy from Isaiah, and would be called Emmanuel, God is with us.

And Jesus is God’s gift to everyone. There may be those who do not want him as a gift. Those who would prefer to pretend he’s not been given. Some may want to, metaphorically, stick him at the back of a cupboard out of sight and mind. There’s certainly no question of sending him back.

Actually, there’s nothing you can do about it really. God’s gift to you is his Son Jesus, born to be your Saviour, whether you want it or not. Perhaps like Mary and Joseph you may feel somewhat surprised that God should give you such a gift. Perhaps like Mary and Joseph once the good news of this great gift has sunk in you say “yes,” and joyfully receive what God offers you. Many of course do not want this amazing gift or are not ready to receive it – you can try to pretend it isn’t real or turn your back on it, but God still holds it out in case you change your mind.

The gift of this child, God’s Son, to Mary and Joseph changed their lives, changed the world, and changes the lives of all who follow him and accept him as Saviour. As this season of preparation, this season of Advent, draws to a close may we all prepare to rejoice at the coming into our world of the greatest gift that any of us will ever receive – Jesus.

And may we, in our turn, be willing to share this gift with each other.