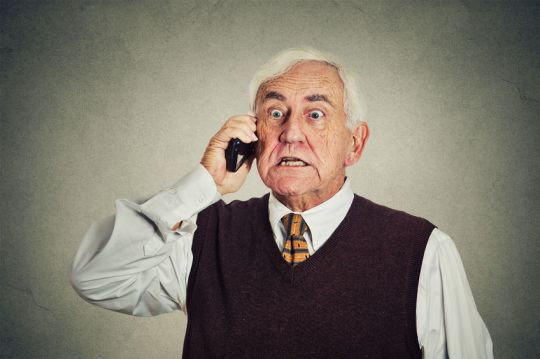 I always prefer surprise presents for Christmas and birthdays. The one surprise present I have never received, though, is a book I’ve been expecting for some time – ever since it was published in 2004.

I’m surprised my children – and I’m thinking of one of them in particular – have never thought that an appropriate and fitting gift for me would have been the book Grumpy Old Men – A Manual for the British Malcontent. Written by David Quantick it has an introduction by Rick Wakeman – in my opinion the greatest keyboard player in the history of rock music and a self-confessed grumpy old man. Amazon has a description of the book:

At last! A comprehensive, handy guide for the misery-guts in your life. Are you an irritable, crabby, cantankerous, malcontented old grump? Well relax, because you’re not alone. Grumpy Old Men is an annotated, cross-referenced and fully illustrated manual for malcontents everywhere: the comprehensive Gripes of Wrath.

Sounds right up my street!

Perhaps someone should have bought a copy for the prophet Jeremiah. Because someone particularly noted for being a grumpy old man was Jeremiah – though to be fair he was a grumpy young man too in his earlier years. Being grumpy wasn’t something that came to him with age – he was always grumpy. Jeremiah was not noted for being a jolly prophet. I recall that one of the Old Testament essay titles from my college days was “Jeremiah is a prophet of unremitting gloom. Discuss.”

Put Jeremiah and Victor Meldrew side by side and compare them and you’d probably come to the conclusion that, all things being equal, Victor Meldrew had a relatively sunny disposition and a positive outlook on life.

There were many prophets in the history of Israel who sought to bring God’s message to the people. Quite a number of them appear in our Old Testament – both those who have books named after them and others who are also mentioned in the books of history as well as the prophetic books. They were mainly men who spoke God’s word to the Hebrew people. They challenged kings and officials; they called the people of God to account with God’s law. They told them when they were going wrong and they called them back to the path that God had laid out before them.

And one of the most well-known – and most miserable – was Jeremiah. Consider Isaiah for a moment, someone from whom we hear a lot in our Old Testament readings. From the moment Isaiah was called by God to be a prophet he embraced his calling with enthusiasm. Not so Jeremiah – the minute he received God’s call when he was around 30 years old he started moaning, initially at God for calling him – for he was, he essentially told God, completely useless – that’s Jeremiah, not God.

Right – we need to get some context for our Old Testament reading, so let’s begin with some history. By the time Jeremiah began his work as a prophet, around 625 BC, the Hebrew people had become  divided into two kingdoms. The northern kingdom, Israel, had been conquered by the Assyrians about a hundred years earlier[1] and Jeremiah was a prophet in the southern kingdom of Judah.

And Judah was in turmoil when Jeremiah spoke to them. As a country it was caught between two powerful and hostile nations. Conflict between Egypt in the south-west and Babylon to the East seemed to be forcing a choice upon the nation. Submit to the Babylonians or becoming the first line of attack for the Egyptians. Jeremiah’s message to Judah was that the Babylonians were far stronger than Judah and that they should not be resisted. They were inevitably going to be conquered by the Babylonians because the people had rejected God and turn to idolatry. Not a message the people wanted to hear.

Well, you can imagine what the response to that message was! You’re all a load of sinners, you’ve been worshipping false gods, and you’re going to be invaded and conquered, and there’s nothing you can do about it! Small wonder that Jeremiah was considered a traitor for saying that, and small wonder that he has come to be seen as the ultimate prophet of doom! And for proclaiming that Jerusalem would, in the end, be taken by the Babylonians, Jeremiah was lowered down into a pit and left to sink in the mire at the bottom – fortunately he was rescued.

Of course, being a prophet called by God, his predictions were right. In 598 BC King Nebuchadnezzar of Babylon conquered Judah and sent many of its leading citizens into exile. By 587 BC the fall of Judah was complete – Jerusalem was destroyed and a second wave of exiles was taken to Babylon.

But, as you may have guessed, Jeremiah is not all doom and gloom – at the heart of his message of disaster is a message of hope and renewal. The answer to that college essay question of mine, “Jeremiah is a prophet of unremitting gloom. Discuss.” Is “No he isn’t”. Though I had to make the answer stretch to another couple of thousand words!

In the midst of national disaster, Jeremiah prophesies that God will renew the promise that he had made through Abraham and confirmed in the Exodus. This promise Jeremiah calls a covenant. The word covenant is an important word in the Bible – it means an agreement made by God with his people. It’s the same word as testament. The Old Testament and the New Testament are really the Old Agreement with God, or the Old Covenant, and the New Agreement or the New Covenant.

And this renewed covenant of which Jeremiah speaks will, he says, be different. The thing about the covenants that God had made with Noah, with Abraham and Sarah, with the people of the Exodus from Egypt, was that the focus was solely on God’s commitment to his chosen people. In this new covenant humankind and God will be present together – it’s much more a two-way agreement.

But what is surprising about this two-way covenant is that, as Jeremiah tells us, God will fulfil not only God’s part of the covenant but humankind’s as well. This is not a covenant where God lays down rules and people have to work hard to keep them all. God makes it easy for us. He says that he will put his law within his people, write it upon their hearts. He will be their God and they will be his people and they shall all know him. God makes it easy for us! No more messages from prophets like Jeremiah saying, “You’re all a load of sinners so God’s going to punish you!”

This is something that we should treasure. That God in his love has written his law upon our hearts so that we instinctively know it. Jeremiah’s message is that, essentially, it’s harder to turn away from God and be disobedient than it is to follow God – for God has made it a part of our nature to know, deep within ourselves, how to live and how to love.

And our final two readings today show how God’s words through Jeremiah are brought to their ultimate conclusion. Jeremiah had said: “They shall all know me, from the least to the greatest, for I will forgive their iniquity and remember their sin no more.”

Jesus, says the unknown writer of the letter to the Hebrews, is our high priest – the one appointed by God to bring God’s saving love to all. For this is God’s desire, to draw all people to him in an eternal loving relationship. John, in his gospel, tells how some Greeks are drawn to Jesus and wish to see him. And Jesus proclaims the depth of that everlasting covenant that God has made with humankind. Yes – choices are to be made about living in God’s way. Yes – judgement will be rendered according to those choices. However, God’s grace is continually offered.  And Jesus the Christ draws us close with saving love through the cross: When I am lifted up from the earth I will draw all people to myself.

Lord, on the cross you draw the eyes of all the world to you.
We want to see you with our whole hearts.
Draw us into the embrace of your loving and merciful promise,
and teach us to live in your ways.
Then make us bold to reach out
and draw others into the joy of living in communion with you.
Amen.