Here’s what I preached this week. I concentrated on the gospel reading from John, and as you’ll see encouraged people to reflect on the reading during the week to see what Jesus might say to them through it. If anyone does do this and would like to share any thoughts just use the comments link at the end of the sermon. I’d love to hear other people’s insights. 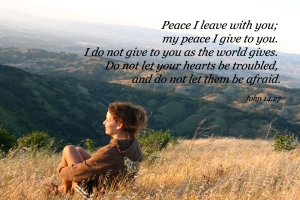 Today’s gospel reading is rather like a box of chocolates. Open a box of chocolates and you’re faced with a choice of mouth-watering centres. And you’re not quite sure which to pick first. Open your Bible to our gospel reading today and you’re faced with a choice of uplifting and encouraging and familiar statements from Jesus. And just as any chocolate box has those chocolates that some people don’t like, so this passage has sayings of Jesus that many Christians don’t like or feel uncomfortable with. And the preacher is faced with a difficult choice – which one to preach on?

“Do not let your hearts be troubled.” Easy for Jesus to say, of course, yet we spend our lives being troubled and stressed.

“I am the way, the truth and the life. No-one comes to the Father except through me.” Such familiar words, and yet words which leave some Christians feeling uncomfortable because they seem to imply that Jesus rejects those of other faiths and those who have never had the opportunity to discover him.

“The one who believes in me will also do the works that I do and, in fact, will do greater works than these.” And yet we’re all only too aware that Jesus performed great miracles and that doesn’t seem to be the case with us. What was Jesus expecting us to do?

“I will do whatever you ask in my name.” And yet we all know those times when we’ve asked for something and Jesus hasn’t done it. So how do we understand what Jesus meant by that?

You could spend a month preaching on this passage and still have more to cover. This morning we only have 15 minutes – and that’s not an invitation to time me! So I’m just going to reflect on those opening words of Jesus to his disciples which begin what we call the Farewell Discourses – three chapters in the gospel of John in which Jesus speaks to his disciples in the upper room after they have shared the Last Supper. And I’m going to set you a challenge – to take your service sheets home and read through the gospel reading during the week and spend a few minutes reflecting on it yourselves. It’s conveniently 14 verses long so take a couple of verses each day and see what Jesus has to say to you through it.

So – Jesus’ opening words. “Do not let your hearts be troubled. Believe in God; believe also in me.” The writer presents us with Jesus speaking to his disciples shortly before he faced death, seeking to comfort and encourage his disciples. I cannot tell you how many times I have read those words aloud at a funeral service – several hundred. They are such good words, comforting words, for a funeral, and we find the idea that Jesus should go to prepare a home for us where he will take us to live with him a great comfort during times of bereavement.

The thing is, that in this exchange with his disciples Jesus is trying to get across to them who he is, where he is going, and what will happen to them. Jesus had tried to prepare the disciples for his death, but they could not understand that anything good could come from it. It is easy from our perspective – looking back at the cross and the empty tomb – seeing Good Friday and Easter together – to think how dim the disciples must have been! Couldn’t they see what Jesus was doing? The answer is “No!” They couldn’t see. They couldn’t see beyond the cross – and who can blame them. Jesus had shown such promise. He had shown them things that they had never seen. He had taught them things that they had never dreamed of. He had drawn great crowds that came to hear his words. The disciples had come to believe that he was the Messiah. If they were right then Jesus was poised to change the world. Empowered by God, he could transform Israel. He could take charge and make Israel great again – great as it had been in the time of King David. If Jesus really were the Messiah, the possibilities were endless.

But now he was talking about dying. He had come right to the edge of huge success, but he was speaking of death. The disciples didn’t know what to make of it. They were depressed. They were afraid. They knew that there was great danger. They knew that the men who ran things in Israel had taken as much from Jesus as they were going to take. If Jesus had told the disciples not to worry because he was about to take power, they would have been greatly relieved. But Jesus talked about dying.

I want at this point to tell you about Dietrich Bonhoeffer. Bonhoeffer’s name may be familiar to you, but you may not know his story. Bonhoeffer was born in Germany early in the century and was raised in Berlin in a very comfortable home. He was bright, and he made his way quickly through school. At age 21, he finished his doctorate at the University of Berlin. That is the age at which people expect to complete their bachelor’s degree. They would spend many more years to finish their doctorate. Bonhoeffer finished it by the age of 21. Karl Barth, one of the greatest theologian of the 20th century, pronounced Bonhoeffer’s dissertation a “theological miracle.” Bonhoeffer was poised for greatness.

Bonhoeffer went to the United States to study at Union Theological Seminary in New York City. While there, he involved himself in the Abyssinian Baptist Church in Harlem. He was profoundly influenced by their commitment to social justice and human rights. He returned to Germany in the early 30s, just as Hitler was beginning his rise to power. Bonhoeffer saw what Hitler was doing to the Jews, and he spoke out. Appalled by the church’s failure to oppose Hitler, he founded the Confessing Church to denounce the Nazi evil. Over the next few years, he continued to oppose Hitler, but the Confessing Church lost momentum under heavy persecution.

In 1939, a few months before Hitler invaded Poland and started World War II, Bonhoeffer returned to Union Seminary in New York. Discouraged by events in his home country and the apparent failure of his Church to make a difference, he considered making the United States his home. After only a few weeks, though, he decided that he had made a mistake. He bought a one-way ticket, and boarded a ship to Germany. His American friends pleaded with him to stay in the United States, but Bonhoeffer said:

I have made a mistake in coming to America. I must live through this difficult period of our national history with the Christian people of Germany. I will have no right to participate in the reconstruction of Christian life in Germany after the war if I do not share the trials of this time with my people.

And so he went back to Germany to oppose Hitler. He even joined a group that tried to kill Hitler. He was arrested and thrown into a concentration camp. An interesting thought, that – we celebrate in our calendar a Christian who was part of a group that planned an assassination. He was executed only a few weeks before the war in Europe came to an end.

As I read Bonhoeffer’s story once again this week, it struck me how closely his life and death paralleled the life and death of Jesus. He could have been safe but he felt he was doing the right thing by returning to Germany, even though he was risking his life. Think of his friends pleading with him to stay in America. How terrible they must have felt to see him board the ship that would carry him away forever. They knew his life would be in danger. They couldn’t understand why he was doing this. They must have felt exactly as Jesus’ disciples felt on that night in the upper room – depressed, fearful, frustrated at the prospect of great potential being wasted. In circumstances just like that that Jesus said, “Do not let your hearts be troubled. Believe in God; believe also in me.”

Which leads us to today. For we have plenty to be troubled about. We face one apparent financial crisis after another – either in our own country or in some other part of the EU. Our armed forces are now involved not just in Iraq – today officially for the last day – and Afghanistan but in Libya, yet we can’t afford them. One country after another in the Arab world seems to be falling apart as people seek change and people are dying because of it. We know that millions across the world still starve. We wonder what world there will be in 50 years if we can’t control the climate. The death of Osama bin Laden only served to remind us of the continued threat of global terrorism. And it all seems too much to get our minds round as we face the day to day struggle of making ends meet in the current economic climate.

But Jesus comes to us in the midst of this darkness – the darkness of this world – saying, “Do not let your hearts be troubled. Believe in God; believe also in me.”

What does that mean? Does it mean that Jesus guarantees comfortable lives? No! Does it mean that we will not experience pain? No! We all face pain and struggle – as individuals and as a nation. The way ahead is never certain and safe. But Jesus says, “Do not let your hearts be troubled. Believe in God; believe also in me.” That is not a promise of easy lives, but is instead a call to faithfulness – a call to love even when surrounded by hatred – a call to promote justice and love even in a world gone mad – a call to oppose evil wherever we find it – a call to believe in Christ even when the night is dark.

How do we find the strength do that? Many centuries ago, a monk, Brother Lawrence, wrote the following, recorded in a book opf his teachings entitled The Practice of the Presence of God. In it, Brother Lawrence says:

Brother Lawrence calls us to spiritual discipline – to prayer – to the reading of the scriptures – to worship. He calls us to those things that enrich our spirit and strengthen our soul. He tells us what we already know but what we often forget – that we cannot be strong spiritually without regular communion with God.

If at times our lives seem hard, if the way ahead presents challenges – bereavement, unemployment, illness, depression, difficult relationships at home – it is difficult to face the future without a sense of fear. We need strength and comfort, both of which we will find when we kneel at Jesus’ feet. Let us begin to prepare ourselves now. Let us be in constant communion with Jesus. Let us seek his will for our lives, and find in him the strength for every circumstance.

Jesus says, “Do not let your hearts be troubled. Believe in God; believe also in me.” Jesus, when he spoke those words, was preparing his disciples for life without him. I suggested earlier that you use this gospel reading through the coming week. As you reflect upon it, allow Jesus to speak those words to you, as he prepares you for life with him.