I decided to preach on the New Testament reading this week, from the letter of Paul to the Ephesians. 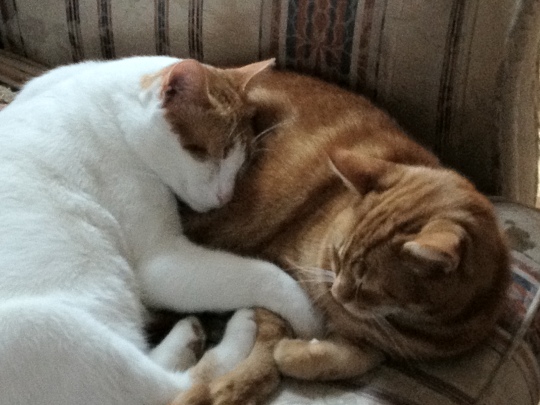 She always knew that if she kept out of the others’ way then she would be alright. She knew that if she just kept her head down then she wouldn’t be bullied. She understood that she would always be bottom of the pile. It was just how things were. And that worked fine. And they all managed to co-exist. And for all of her life that’s how things were for Flixie. And Fursey was happy as long as he ran the show. When Cedd and Bede moved in, Flixie managed to get on with the newcomers. Cedd, being rather gentle himself, soon fitted in. Bede, though, found himself bullied. So he took to living outside most of the time to keep out of Fursey’s way, often gone for days on end. Fursey was going to make sure he was boss. It stayed that way when they moved house. And even when he came in Bede would usually hide behind various bits of furniture.

Until Basil moved in. Basil soon made friends with gentle Cedd, but in no time made Fursey realise that he was top no longer – that was now Basil’s position. And Fursey was so worried by his regular fights with Basil that he stopped bullying Bede. Bede was able to start living a normal life. And now, even though Basil has established his place, and has on the whole stopped chasing Fursey – he now just rolls over and looks at him – Fursey won’t let it drop. If Basil comes near Fursey just growls at him, even if Basil is totally ignoring him. Fursey won’t forget how he has been treated. Forgiveness isn’t in his vocabulary.

Naturally I love all of our cats – even when they’re being naughty and not getting on – but there really are times when I would dearly love them to be a little more loving to one another. It is, after all, in their own best interests. They have to share the same home and the same food, so they might as well learn to get along. Life would be so much more enjoyable for them if they did. But – sadly – it’s not in the nature of cats to always get along. And they just don’t know how to behave any differently. Cats have minds of their own.

Well, isn’t it a good thing that people aren’t like cats – that people are always able to live together in love and harmony and never disagree or quarrel about anything!

I’m being facetious, of course. We all know that life is not like that. A reality of the human condition is that people have a tendency not to get on with one another. From the macro to the micro, the big to the small. From whole countries that cannot get along with one another, down to individual dysfunctional families and individuals who just don’t seem to have a decent word to say about one another – try as we might we humans seem so easily to able to argue, fight, disagree and just generally not get along. And sometimes I feel that God must despair over his people’s inability to get along, over their apparent desire to argue and fight when life would be so much better if they would learn to love one another, the same way that I sometimes despair over the behaviour of our cats.

Jesus, as we know, came to show us a different way. A way of life centred on mutual love and care, on justice and sharing, of care and compassion. He taught us that God is love. And after the resurrection he founded the Church to continuing teaching and showing the world his message of love, and of living in the God who is love.

So – isn’t it a good thing that even if people in general are not able to live together in love and harmony that the Church is able to show by example that there is a different way, a better way of living – God’s way of love. People only have to look to the Church to see how to live.

Well, I am of course being facetious again. We all know that a reality of the Church is that it does not have that unity to which it should aspire. The world-wide Church is divided on both a global and a local level. Our own national Church, the Church of England, faces issues that have – at times – resulted in individuals using the most intemperate language of one another. Disagreement and difference are, at one level, quite normal. They are a part of our human condition. But there are ways of handling disagreement and difference that accord with God’s law of love and ways of handling them that just don’t.

It’s much the same in any local congregation, of course. There will be differences of opinion, disagreements over matters both theological and practical, and just good old plain and simple personality clashes. A key question we must always ask is ‘how as followers of Jesus do we handle our disagreements and difference?’

Which brings us to our New Testament reading for today. We have heard an extract from the letter of Saint Paul to the Ephesians. And if there is one word that could sum up this passage it is the word ‘one’ – or ‘unity’ – which is two words but they mean the same thing, really, in the context of this passage.

Now, we believe that the letter was not, in fact, written to a single church community but was a kind of circular letter that was intended for a number of churches. And there are two key things we learn from this passage when thinking about the unity of the Church. The first is this – it is clear from the emphasis Paul places on unity, on being one, that he is writing to a church that is divided in some way. And there’s a level at which we might take some comfort from that. Churches where people are divided or in disagreement, churches that in some way seem unable to come together and exercise the Christian charism of love that is essential if a church is to be united, are nothing new. They’ve been around as long as the Christian church itself. And they will continue to be around until Christ’s return. Perhaps we shouldn’t worry too much.

But the second thing we learn from Paul is this. Divided churches there may well be – but divided churches must recognise that division is not acceptable. Now, we’re not talking about differences of opinion here – it’s normal for people to disagree. Paul disagreed on occasion with Peter. But Paul is writing to a church where division has become an issue, and Paul is quite clear that unity is a gospel imperative, and as if to emphasise this he uses the word ‘one’ seven times in two verses:

There is one body and one Spirit, just as you were called to the one hope of your calling, one Lord, one faith, one baptism, one God and Father of all, who is above all and through all and in all.

Important to note that Paul isn’t saying everyone must be the same. He goes on to stress: ‘each of us was given grace according to the measure of Christ’s gift.’ Each person has a different role to play within the church community, and different Christ-given gifts to contribute to the life of the church community. And yet the church community must be one – we, as a church community, must be one. For this essential unity is a foundational work of God, not a human construct. God has decreed that it must be so. It’s a given – not something that we can accept if we want to, but ignore if we don’t. It goes against the grain for human beings, but we, as followers of one Lord, united by one faith and one baptism, part of one body, must give ourselves over to the unity that God demands.

So how do we embrace that unity, that reality of being ‘one’, that our one God and Father who is above all and through all and in all demands of us?

Well, Paul has already told us, at the beginning of this passage. We have to make the effort. Listen to what he says:

I … beg you to lead a life worthy of the calling to which you have been called, with all humility and gentleness, with patience, bearing with one another in love, making every effort to maintain the unity of the Spirit in the bond of peace.

Basically, he says to those he is addressing, it’s down to you. The ball’s in your court. You must make every effort to maintain the unity of the Spirit. Start thinking about how you are relating to one another. Christ has called you – live a life worthy of that calling. Show humility and gentleness to one another. Be patient. Bear with one another in love. For this is the life to which you have been called. And the bottom line is this – you must value the unity given by God above all else. As we think over these words of Paul the question arises – how much do we want that unity? Or do we value ourselves, our own preferences, more? Do we accept that the kind of unity that God demands is unrealistic and so make no effort to achieve it? Paul doesn’t give us a choice – a church may be divided, people may not get along with one another, but you must work at overcoming it for God accepts nothing less than unity. Be one!

Bishop Paul Marshall, Anglican Bishop of the Diocese of Bethlehem – and that’s Bethlehem in Pennsylvania, not the Holy Land – commenting on this passage poses the difficult question this way: ‘To what degree do we desire less unity than God intends?’ and he goes on to say ‘The community envisioned in Ephesians challenges entropy itself. Things and people do not have to move apart for chaos to enter.’ He infers that we need to grasp the unity God intends or face chaos within the church without even realising it. This is the dangerous place the Ephesian Christians were in.

Do we desire less unity than God intends? Or will we allow the words of Paul to inspire us to change the way we behave toward one another: I … beg you to lead a life worthy of the calling to which you have been called, with all humility and gentleness, with patience, bearing with one another in love, making every effort to maintain the unity of the Spirit in the bond of peace.

When we have disagreements, when things happen that have the potential to cause division, are we willing to put aside our human inclinations to get angry, argue, complain … and show that humility and gentleness, that patience and love, which Christ has called us to? Paul makes it clear – God demands nothing less.

Lord Jesus,
give us the will to lead lives worthy of the calling to which you have called us,
with all humility and gentleness, with patience,
give us the desire to bear with one another in love,
making every effort to maintain the unity of the Spirit in the bond of peace.