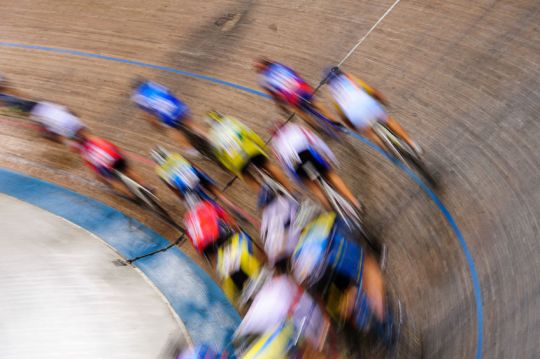 This week’s gospel reading was about Jesus healing on the sabbath. The leader of the synagogue got a bit upset!

Where would we be without rules? Rules are important aren’t they? Without rules we’d all descend into chaos. It was the rules that caused such a problem for Jason Kenny as he rode to his sixth gold medal in the men’s keirin cycle final in the Olympics this week. For those of you who weren’t watching let me explain. The keirin is a race where the riders all do several laps of the track behind a kind of electric moped that gets faster and faster. Then, when the moped leaves the track the riders all race for the finish.

The problem was that in the first run of the race a judge decided that at the last moment one of the riders had overtaken the moped by a matter of a couple of centimetres before it left the track – against the rules. So the race was stopped, and judges poured over a replay of the race to decide who had broken the rules – possibly Jason Kenny. The commentators couldn’t tell whether he or anyone else had. While we waited the commentators repeated several times in different ways: this has never happened before, this is without precedent, the problem is the rules are not entirely clear, they’re subject to interpretation.

In the end the judges decided nobody was at fault and the race started again. Only for the same thing to happen again – with a different rider as the suspect. And then we had another wait while the judges looked at the replay. And off went the commentators again: this has never happened before, this is without precedent, the problem is the rules are not entirely clear, they’re subject to interpretation.

Rules. Our gospel reading today is about rules. And I’d love to be able to hear the cycling commentators from Rio describing the events as they unfold in the synagogue. Because you can almost hear them saying about what has happened: this has never happened before, this is without precedent, the problem is the rules are not entirely clear, they’re subject to interpretation.

Rules. Our gospel reading today is about rules. When to keep them and when not to, and how to properly interpret them. And about whose rules or which rules take precedent. It is in essence about the Jewish Law. And the Jewish Law was there for a purpose. It was God’s Law, given by God himself and not made up by people, not to be broken lightly. And as Jesus himself said, he came to fulfil the Law, not to abolish it. So what is he up to in our gospel reading today. Has he broken the rules? Or is it down to how you interpret them? Should he be allowed to get away with it?

On this particular Sabbath that the writer of Luke tells us about, Jesus has accepted an invitation to teach in a synagogue – the place where a Jewish congregation met for prayer, scripture reading, and teaching. And Jesus sees a woman there who has been unable to stand up straight for 18 years. As the writer puts it – and this actually the exact meaning of the word he uses in the original Greek – she is “bent”.

Jesus calls to the woman, and she responds by coming forward. He touches her and declares she is “set free” from her ailment – an interesting choice of words, “set free” rather than “healed.” She stands up straight, praising God. And you might like, at this point, to just think about the things in life that leave you feeling “bent”, the things you would like Jesus to set you free from.

The leader of the synagogue is angry. It’s always a problem for any church minister when a visitor completely ignores the rules. Every once in a while some other minister comes along and they just won’t do what you tell them to. Bishops, of course, are almost always like that – you just have to live with them. But others should know better. At the Church Army Training College (a college for training evangelists for the Church Army Mission Community, an Anglican organisation) we had college communion every Wednesday at 6pm followed by supper at 7pm. A full sung service with a visiting preacher each week. They were told they had ten minutes. One Wednesday that week’s visiting preacher decided 10 minutes wasn’t enough. After half-an-hour the principal sent someone to the kitchen to tell the chef to slow down. After another fifteen minutes he sent someone else to tell him to slow down even more. The preacher finally sat down to everyone’s relief after an hour. We had supper overcooked and nearly an hour late, and nearly lost the college chef. The leader of the synagogue is angry – Jesus isn’t playing by the rules.

Visiting teachers can be a problem, as the leader of the synagogue discovered. So angry he tells his congregation off – come and be healed on another day, there are six of them, don’t expect to be healed on the Sabbath. And that despite the fact that the woman never asked to be healed. It probably came as a complete surprise to her that Jesus calls her out from the congregation. And the leader of the synagogue refers Jesus to two passages from the Scriptures – to Exodus 20:9–10 and Deuteronomy 5:13–14, which mandate that no work is to be done on the Sabbath.

This follows God’s example of rest during the time of creation and ensures that no one has to endure harsh, relentless labour as the Israelites did when they were slaves in Egypt. Honouring the Sabbath was an important part of living out one’s Jewish identity. And like much of the Jewish Law it was, in origin, there to set people free, rather than to oppress them. Jesus understands what the Law is really all about. He understands God’s rules very clearly – and he understands what they are for and when they need to be given a less than literal interpretation. So – has Jesus broken the rules by healing on the Sabbath?

But Jesus interprets the rules differently. In his challenge to the leader, Jesus points out that each Sabbath they fed and cared for the animals on which their livelihood depended. That was permitted, for it was clearly wrong to allow an animal to suffer on the Sabbath, so where animals were concerned you could carry out a certain amount of work.

Jesus continues: “Ought not this woman…be set free from this bondage on the Sabbath day?” He shows how he isn’t breaking the Law but that a correct interpretation of the Law allows the woman to be healed. So has he broken the Law? No – not by simply healing her.

But he does something quite provocative. Jesus states that this woman has been bound by “Satan.” In the New Testament, Satan represents a being in opposition to God who causes disease and disaster. Jesus has come as a champion of the greater power of God’s healing reign. And not only has Jesus performed in the eyes of the leader of the synagogue unnecessary work on the Sabbath – the woman was believed to be possessed by a spirit that caused her problem, and this meant that she was ritually unclean and therefore untouchable.

Jesus could have healed her without touching her and left it at that – a simple matter of interpretation. But as if to make an undisputable point about the worth of this woman and the need for her to be healed on the Sabbath he does something that clearly is a breaking of the Law. For Jesus has not only healed her, he has touched her and made himself unclean, in the eyes of the Law. It’s crystal clear – no need for interpretation – Jesus has deliberately broken the rules and the leader of the synagogue says so.

But Jesus has made his point. And the crowd don’t care. They rejoice at what Jesus has done. The woman has been set free from her ailment.

Jesus welcomes, loves, and restores all in the ways of God’s healing reign. And we are invited to celebrate and praise God for such love, and for the way God, through Jesus, sets us free. We also are called to be agents of such healing freedom. Jesus calls us to live lives of faith, reaching out to show the love that God has shown us in the way we deal with others – reaching out with healing, with justice, and with the good news of redemption and release – reaching out to “set others free as we have been set free, as the bent woman was set free.

But we must have eyes to see – not closed eyes and a closed mind like the leader of the synagogue. Who in our community is bent over, is living “in the shadow” in some way? And how might we – as individuals and as the church – reach out and invite them to the centre of our community’s life together? Are we ready to embrace the ultimate rule given us by Jesus – the rule of love?