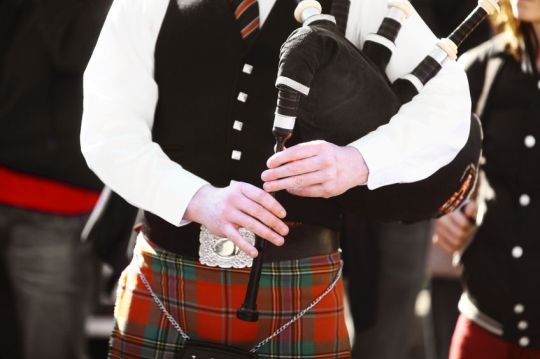 One of the best known commands of Jesus is the command to love your neighbour. Even people who aren’t Christians or have never opened a Bible know it. And yet, as we all know, neighbours are not always easy to get along with!

There is a story of a young man who leaves his home in Aberdeen and goes to live in London. After he has been there a while he phones his mother to let her know how things are going.

“How’s the flat you’re living in,” she asks him, “what are the neighbours like?”

“Well,” he replies, “the woman next door keeps screaming and crying all night long, and the guy on the other side is constantly banging on the wall!”

“Never mind,” says his mother, “don’t let them worry you – just ignore them.”

“Oh, I do that,” says her son, “I just drown out the noise by playing my bagpipes all night!”

I’ll come back to neighbours later!

This morning we hear Jesus telling a story about weeds being sown among the wheat in a farmer’s field. A farmer has sown his wheat when along comes an enemy and sows weeds among the wheat, which presents the farmer with a problem – the only solution to which is to wait until harvesting time and then to sort everything out. The gardeners among you will know about weeds. I’ve always thought of a weed as a plant that is just in the wrong place. And Ralph Waldo Emerson, the nineteenth century American poet, once wrote, “What is a weed? A plant whose virtues have not yet been discovered!”

Except the weeds that Jesus is talking about are not weeds with undiscovered virtues. The weeds that Jesus is talking about were called bearded darnel – commonly known as tares. These tares were, contrary to Emerson’s view, weeds that had no virtues whatsoever. They were nothing but a problem. When growing, the shoots from the tares were virtually indistinguishable from the young wheat, so a farmer had no way of telling one from the other. As they grew the roots of the tares would entangle themselves round the roots of the wheat – so even if you could identify the tares you couldn’t pull them up without pulling up the wheat as well. They sucked up precious nutrients and the scare water, taking them away from the wheat.

All you could do was wait until the harvest – for it was only when the ears appeared that it became clear which shoots were tares and which were wheat, as the ears are quite different and wheat grew taller than the tares. Only then could you separate them out – which was vital as the seeds of the tares could cause everything from hallucinations to death. Which brings me back to the subject of neighbours! Tares were a real problem – to the extent that when neighbouring farmers fell out with each other, a common threat of the time was, “I’ll come and sow tares in your field!”

Matthew is the only one of the four gospel writers that gives us this parable that has come to be known as the parable of the wheat and the tares. So what is Matthew trying to get across?

Well, it’s not difficult to understand that Jesus is highlighting the issue that good and evil exist alongside each other even in the kingdom. He talks about the impossibility of separating out the wheat from the weeds, the good from the evil – the children of the kingdom from the children of the evil one as he puts it when he explains the parable to the disciples. Jesus acknowledges that even in the midst of the kingdom – even in the midst of God’s people here on earth – there is evil.

We all know that reality in our everyday lives. We all know what Jesus is talking about. We all know that however hard we might try to live what we might call ‘a Christian life’ our own lives resemble the farmer’s infested field, with wheat and tares mixed up in our hearts, minds and souls. The apostle Paul knew that when he wrote in the letter to the Romans, “I do not do what I want, but I do the very thing I hate” (Romans 7.15)

And much as the Church, and its members, may aspire to be the kingdom of God, the reality that we need to face up to is that the Church can never fully achieve the fullness of the kingdom in this world. As a community, as individuals, we are called to imitate Jesus, to behave as Jesus would behave, to love as Jesus loves, to present the face of Jesus to the world, to constantly ask that question What would Jesus do? and to do it – yet we so often fail. The problem is that we are very good at highlighting the failings of others in the church, while totally ignoring our own failings – rather like the young man playing his bagpipes to drown out the noise from his neighbours, oblivious to the reality that he was the problem.

The reality that those who follow Jesus are not all holy and good, but people who fail, has always been true of the Church. It was true of Matthew’s church community. Matthew wrote this Gospel several decades after the resurrection and he included this parable to remind his church community that while they were called at one level to separate themselves from the world and to live according to the commands of Jesus, they could never truly separate themselves from the reality of the world they lived in. And this particular parable has always been interpreted as being about the Church.

If you read Matthew’s Gospel carefully, you can see that he really wants the church and particularly individual Christians to be a true embodiment of Jesus in the world, to really live out what it means to be the kingdom of God in the midst of the kingdoms of this world.

In Matthew’s Gospel, Jesus demands righteousness exceeding that of the scribes and Pharisees. He says that anyone who is simply angry with a brother or sister is in danger of hellfire. He says that a man who looks on a woman with lust has already committed adultery with her in his heart. He calls for incredibly high standards! Some would say impossible standards! Matthew really wants Christians to practice personal holiness and to strive for a life without sin.

But Matthew also knew the reality that however much Christians seek to live righteous lives the sin is always there. And so he also shows the other side. He knew how easy it was for Christians to criticise others and he records Jesus as saying, “Judge not that you be not judged.” And he includes this parable of the wheat and the tares to keep us rooted in reality – to remind us that in the end we’re are all a bit mixed up – some good, some not so good.

Which brings me back to neighbours again! People are very good, like the young man in the story I began with who played his bagpipes to drown out the noisy neighbours, of assuming that other people are the problem but that they themselves have nothing to answer for and are not at fault in any way. And we can be like that in the church. Of thinking that other people are the problem but that we are fine. I can’t keep track of the times I hear people point out other people’s faults. And that’s not just a problem at St John’s – it’s true of every church. People are very good at highlighting the faults of others and failing to acknowledge their own. People are very good at playing bagpipes to try and drown out what they don’t want to hear – yet ignoring the failings in their own lives! The young man would have been better off putting his bagpipes down and going and knocking on his neighbours’ doors so he could get to know them better – he’d also have found the screaming and the crying and the banging on the wall went away.

Jesus reminds us, in this parable of the wheat and the tares, that even within the church we are all some of one and some of the other. We are all wheat, yet we are all tares as well – We are all a bit wheaty but a bit weedy too! We all do what we can to follow Jesus, yet we all also struggle with the realities of everyday life. We try to do our best, yet we all sometimes get things wrong.

The parable of the wheat and the tares teaches us to be patient with people. To accept their imperfections just as we hope that they will accept ours – because we all have them! It tells us that God will do the sorting out in the end. It isn’t our jobs to weed out the failings in other people’s lives – we will have our hands full if we just take care of the weeds in our own lives.

Ultimately we have to leave it to God to sort out the mess in the fullness of time when the harvest comes – it’s our job to get on with the business of growing as best we can with his help. And as we do so we would all do well to stop complaining about the noisy neighbours, put down our bagpipes and to start knocking on our neighbour’s doors.