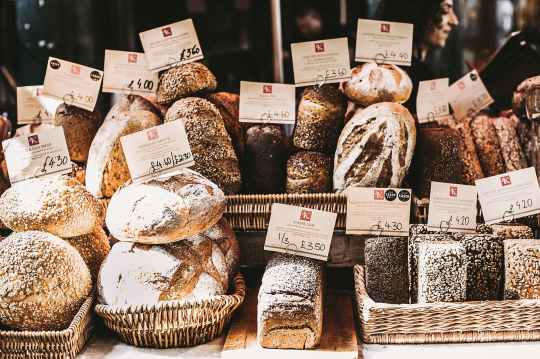 I was preaching away from home this week, at the lovely little church of St. Mary’s Farleigh. Here’s what I said.

Well, just like the proverbial bus that doesn’t come along for ages and then three come at once, so in our readings we go for months on end without any reference to bread, and here we are for the third week in a row with a gospel reading about bread. Having had the feeding of the five thousand on five loaves and two fish two weeks ago, last week and this we get Jesus saying, “I am the bread of life.”

This makes life difficult for people like me who plan services. There are only so many hymns about bread in our hymn book. At St. John’s I think we ran out last week! And there are only so many sermons you can preach in a row on the same theme! And just in case you were wondering – yes, next week you get Jesus saying, “I am the bread of life” for the third week in a row!

So why is bread – living bread – so important that we have four gospel readings about Jesus and bread?

Life seemed so much simpler when I was a child. Buying food, for example, was so much easier. Fruit and vegetables were only available in season – no looking down the rows of vegetables in the supermarket wondering what to buy this week– you simply had what was there. Well, let’s face it – there were no supermarkets – only the wonderful old Sainsbury’s with its one long counter and lots of assistants ready to get everything for you.

And as for bread – well, for starters it was delivered to the door by a man in a van. I can still remember the man who used to deliver ours. He came three times a week. There wasn’t a great deal of choice. He could fit some of each kind of bread into the basket that he brought to the back door – large white, small white, Hovis – that was it, and all baked at his own bakery. And – and I know people who have never actually done this – you had to slice it yourself. I can still remember when he turned up at the back door and proudly announced that he would be adding Mother’s Pride sliced white to his range.

Large, small, sliced, unsliced, thick sliced, medium sliced – white, brown, half and half, toastie, pitta bread, nan bread, olive bread, ciabbatta, French sticks, French pain de campagne, rye bread, soda bread – the list goes on. And perhaps – with bread, like every other kind of food, being available in such quantities and varieties we take it for granted.

It hasn’t always been that way. For most of human history, and still in much of the developing world, bread is perhaps the most important foodstuff, followed closely by rice. And for many people more than any other staple, bread represents life. It’s known as “the staff of life”. And at the time of Jesus bread was the all-important commodity of the ancient Near East.

And when Jesus chose bread for his symbol of life he knew that in speaking the language of the humblest table his followers would understand the message because everyone ate bread in one form or another. They had to in order to live. The problem we have is that bread – and so many different kinds of bread – are so readily available that we no longer understand the real impact of what Jesus is saying. Bread for us is not a necessity – but for the people to whom Jesus spoke it was. Bread meant staying alive – no bread meant no life.

And so Jesus identified himself with the nourishing and life‑giving properties of bread. As one cannot live without bread, one cannot live fully without the Son of God – this is his message. And such an important message that following on from the feeding of the five thousand in John’s gospel we then get Jesus speaking at length about being the bread of life – enough for three more Sunday gospels! Because to accept the bread of life that is Jesus, to embrace the life that feeding on him brings, is the only way to know God and enjoy life for ever.

As Jesus explains this in the Gospel he says something deeply shocking to many of those who heard him. He says, “I am the living bread that came down from heaven. Whoever eats of this bread will live for ever; and the bread that I will give for the life of the world is my flesh.” Elsewhere in this three week narrative about the Bread of Life he tells people that they must “eat his flesh and drink his blood”. To us who hear this kind of language week by week in our communion service we miss the impact these words would have had.

For this was deeply shocking to Jews for whom the partaking of blood was against the Law. And as for eating someone’s flesh! The man must be mad. And John goes on to say that because of Jesus’ words here some of those who followed him followed him no longer.

It’s obvious that John, writing after the event, quite clearly expects those for whom he is writing to connect the words of Jesus with the eucharist. When we share bread and wine, Jesus becomes a part of us and we become a part of him. Jesus was sent by God: “I am the living bread come down from heaven,” he says. Living bread, nourishment directly from God, so closely identified with God that to eat it is to share the life of God and – to live for ever.

The living bread, Jesus himself, is food enough for our eternal life. That’s our gospel message today.

At the Last Supper Jesus made his statements about himself into a living reality when he instituted the eucharist to become the foundation of his relationship with the people of God throughout the coming ages.

At the heart of our faith, at the heart of the Church, the eucharist – the Lord’s Supper – shows the presence of our Lord with his People. Here in our communion service is the bread of life come down from heaven so that we may feed on him. And as we feed on him  in the broken bread and the wine outpoured of the eucharist Jesus fills us with his life, and strengthens us that we might go out and share his life with others.