The 15th August is kept by many Christians as the feast day of the Blessed Virgin Mary. In the Church of England it is a major feast day and even though it fell on a Sunday this year we are given the option of keeping the feast rather than doing what some churches do and transferring it to the 16th. So at St John’s we kept Mary’s feast on Sunday. Here’s what I said.

Every year thousands of young people, desperate for fame and fortune, audition for TV shows such as The Voice UK or The X-Factor or Britain’s Got Talent. They’re all apparently convinced of their magnificent voices and star quality. This year, though, they’re out of luck. Britain’s Got Talent never happened. The Voice UK has still not produced a major new star. And Simon Cowell announced on the 28th July this year that the X Factor is no more. Where will aspiring singers find their route to stardom?

Of course, not everyone has star quality. As Simon Cowell said to one X-Factor contestant: If you were the only one in the competition, you couldn’t win it. And to another: My advice would be if you want to make a career in the music business, don’t. This comment I thought particularly mean: If you had lived two thousand years ago and sang like that, I think they would have stoned you.

And my favourite, to a contestant whose day job was as a lifeguard: If your lifeguard duties were as good as your singing a lot of people would be drowning.

END_OF_DOCUMENT_TOKEN_TO_BE_REPLACED

For the fourth Sunday of Advent this year the gospel reading was Saint Luke’s account of the Annunciation. Here’s what I said.

Life is complicated. And it’s only human to want to be in total control. And yet, we know that however hard we try life has a habit of not turning out quite how we want it to.

And we end up asking ourselves that question that is all too often unanswerable.

It might be about the past – we wonder if life might have turned out differently if we’d made different decisions, different choices.

What if I’d worked harder at school and passed my exams?
What if I’d said “yes” when he asked me to marry him?
What if I’d accepted that job offer?
What if I hadn’t drunk too much that night?

END_OF_DOCUMENT_TOKEN_TO_BE_REPLACED

Well, it’s all over for another year, with people across the country wondering what on earth to watch on TV last night – we certainly were! Yes, a week ago yesterday Stacey Dooley and her partner Kevin Clifton were crowned Strictly Come Dancing (Dancing with the Stars outside the UK) champions for 2018, with Kevin shouting out live on air, “it’s a Christmas miracle.“

END_OF_DOCUMENT_TOKEN_TO_BE_REPLACED

Here is the sermon for the 4th Sunday of Advent – the gospel reading is Luke’s account of the annunciation.

When I was growing up Christmas presents were always surprises. You never knew what you were getting until you woke up on Christmas Day morning and starting ripping the paper off the presents. Well – you didn’t know unless you’d been doing some snooping around mum and dad’s bedroom before Christmas. My dad took to hiding them in the loft, little realising that getting into the loft was no barrier for a determined child.

These days people seem to have become accustomed to letting parents, wives, husbands, children know what they want for Christmas – and any element of surprise is taken away. END_OF_DOCUMENT_TOKEN_TO_BE_REPLACED

The gospel reading for the 4th Sunday of Advent this year was Luke’s account of the Annunciation, the visit of the archangel Gabriel to Mary to announce the forthcoming arrival of a special child. Here’s what I said.

In a week that has seen the announcement of the first woman bishop in the Church of England it is interesting to reflect that if a particular person had, at some point in the past, said ‘yes’ instead of ‘no’ the announcement would not have been made. And if you’re wondering who I mean then let me explain. END_OF_DOCUMENT_TOKEN_TO_BE_REPLACED

Today the gospel reading is Mary’s visit to Elizabeth following the Annunciation. Here’s what I said. 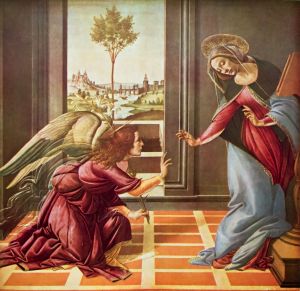 When I first looked at today’s gospel reading last Monday morning there was a bit of me that thought: Perhaps I should put off any sermon preparation until after the 21st – after all, no point in putting a sermon together if it turns out I don’t need one. As it is, the end of the Mayan calendar on Friday didn’t result in the world coming to a sticky end, as some were predicting. And we all woke up on Saturday morning to find the world still here, and much the same as it was the day before. So, here we are, with yet another failed end of the world prediction behind us, considering once again the reaction of a young Jewish girl to the news that – for her, at least, the world was never going to be the same again. For most people, the day following the Annunciation was much the same as the day before. For Mary, the visit from God’s messenger, Gabriel, meant that her whole life was to be turned upside down and she was projected from unknown Jewish teenager to eventual global fame.

There are those who think that receiving the blessing of Simon Cowell and winning X-Factor is a big deal. Believe me – Mary’s blessing from God puts her in a whole different league. END_OF_DOCUMENT_TOKEN_TO_BE_REPLACED