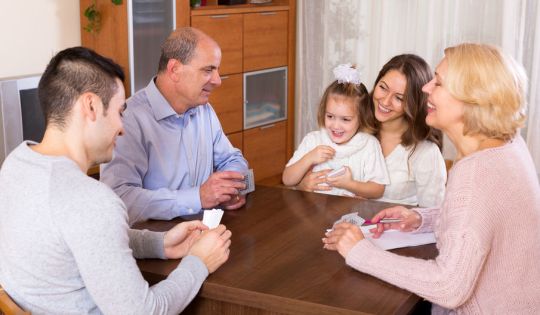 Jesus calls his first disciples. But what about their families? This week’s gospel reading invites us to reflect on the reality of being called by Jesus to follow him.

Do you remember the good old days? When instead of everyone doing their own thing in an evening families used to gather together and either watch TV or play games? And simple games. Nothing like the complexity of today’s video games. And one of the games that used to be popular, and that we played when I was little, was the card game Happy Families.

A Happy Families pack of cards consisted of a number of sets of four. And in each set there would be a father, identified by his occupation and a surname that fitted. Names like – and these are all genuine names from Happy Family sets according to the article on Wikipedia.

The cards were shuffled and distributed and each person had to find who had the rest of a set if they already had a card from that set. Basically, the idea was to put a happy family together and to finish with more happy families than anyone else.

Well – in today’s gospel we see Jesus doing precisely the opposite with the families, not of Mr Fisher, but of two fishermen – Jonah, not named but the father of Simon and Andrew, and Zebedee.

At the time of Jesus family was very important – the family unit was very close-knit and interdependent upon each other. And people took very seriously their family responsibilities. People might not always have got on with their relatives – people, after all, are people and the same then as now. But the family unit was the glue that held Jewish society together.

The expectation was that families looked after those members who could no longer look after themselves for no-one else would – people who were too old to work, or too ill, widows and orphans from other parts of the family. Otherwise you were destitute. And so a prime duty for Jews was to marry and have children. The family was the most important thing – it had to be! And family members took their responsibilities seriously.

And yet today we see in our gospel reading Jesus calling people to behave irresponsibly! Today we see how Jesus calls people to challenge their priorities, and their beliefs about family, and behave in a way that many people would say was wrong today, let alone then.

It’s a story we have heard so often. Jesus, walking along the shore of the Sea of Galilee comes upon two fishermen, Simon and Andrew, sons of Jonah. They are casting their net into the sea. “Follow me,” said Jesus, “and I will make you fish for people,” So, Matthew tells us, they immediately left their nets and followed him.

And then, a little further on, they come upon James and John, also fishermen. They’re with their father Zebedee in the boat mending the nets. Jesus calls them. And they immediately leave their father and go along with Jesus, Simon and Andrew.

But just think for a moment. What about their responsibilities? What about their families? What would have happened had they said to Jesus, “Hang on a moment! We can’t just up and leave everything! We need to weigh up the pros and cons! We need to discuss this with our families – because we can’t just leave them behind. After all, there’s nothing more important than family, is there!”

And yet they said none of that. Jesus called them and they upped and left everything behind to follow him.

And what I want you to do this morning is put yourself into the position of those they left behind. How do you think they might have felt? Remember that this was a society that had no benefits system. You needed to work, or be supported by someone who was working, in order to be housed, fed and clothed.

So we know that Simon was married and had people dependent upon him. Simon’s wife isn’t mentioned in the gospels so we know nothing about her but we know she was around. Saint Paul mentions her, though not by name, as someone who accompanied Simon Peter on his travels after the resurrection. She and her mother would have been very much dependent upon Simon bringing in a regular income. How do you think they might have felt when Simon and Andrew, who must also have contributed to the household expenses, dropped everything and went off following Jesus. Who was going to look after them, pay for their upkeep?

And what about James and John? They left their father Zebedee in the boat mending the nets. Imagine for a moment that you are Zebedee – what do you think your reaction might be to James’ and John’s behavior? A great deal of time was spent by fisherman looking after the nets – the nets were key to their work and had to be painstakingly inspected and repaired otherwise they would be no use. And this was a family business. And then along comes Jesus and takes James and John with him. They just drop what they’re doing and go off. I know what I’d be thinking! How am I going to finish all these nets on my own!

And I suspect that Zebedee would be starting to think about how he would cope without them. For the reality of working life then was that once Zebedee became too old to go out fishing he would rely upon his two sons to support him. They were his pension plan! But if they’ve gone off and followed Jesus what then?

These four men leave everything to follow Jesus when he calls them. Who can know what was going through their minds when Jesus spoke to them? We can only guess – but they went without hesitating, or consulting anyone else about whether they were doing the right thing.

Jesus, of course, still calls people to follow him. He calls us to follow him. And when we hear his call we, like the four fishermen, find that we are often presented with difficult choices. Families may not understand why Jesus is so important to us. They may not be happy with lifestyle choices we make because we put Jesus before all else.

I started by talking about Happy Families – of getting a family all together in the card game. Jesus, here, isn’t playing Happy Families, rather he is doing just the opposite and taking these four chosen men away from their families. Their happiness is to be found elsewhere, it is to be found in fulfilling their true vocation.

Of course, in a way it was easy for Simon and Andrew and James and John. They had Jesus standing right in front of them waiting for a response, and so putting Jesus first was, perhaps, easier for them than it is for us. He knew what their vocation was even if at this point they didn’t understand it – to be fishers for people.

What does he want of each of us? What is our vocation to be as a follow of Jesus? What does he want of us? And how does that affect the people around us? The task of discernment, of deciding what Jesus might be calling us to, is not always straightforward. The voice of Jesus is not always heard with great clarity, and we may need to talk to other Christians about it, and about what we think he might want of us. But listening for the voice of Jesus calling to us is surely essential. Being prepared to follow no matter what and even when we don’t see where he is leading is surely essential – hard sometimes, but essential. Jesus doesn’t call us to abandon our families or to forget about their welfare – we should never do that. But he does call us to put him first in our life and to listen to what he may be calling us to, which is why it is so important that we understand exactly what it is that Jesus wants of us.

For ultimately Jesus, and only Jesus, can determine what our true vocation is. When Jesus calls it’s a tough call. And to follow that call is to put Jesus before all else – even family.